We beat Sherpa Image to press with this one 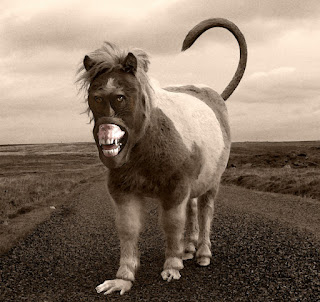 Users at Illogicopedia have recently been accused of snorting Aspercreme with Lidocaine during an after-party for an Australian Rules Power Jousting tournament. Lawyers for the survivors claim none of the entrants were warned of the unusually dense populations huge mutant creatures, due in part to the unusually harsh preceding winter.

Minister for Tabernakian Pyramid Schemes Sir Humphrey Loughton-Bailiwick, announced plans today for an International Croissant Consortium to be established for the preservation of baffling Newtonian groupers. Administrators and bureaucrats hastened to attach themselves to this whopper boondoggle, this exercise in jiggery-pokery, this affront to Nature herself, like lampreys to sharks, like lemons to sharts. Combined, once again, with hoisin sauce, a poultice was made from bedsheets and applied physically to Msr. Flute Charpentier.

Having been to seminary, the Earl new better faster than old less good, and thus his legacy was born. During his semi-cloistered life, many things were taught to him that were denied others. Ancient occult knowledge passed down from knee-jerk to palindrome, as wolves descend from the knee hills to work their murder on jack-booted nutria ranchers.

Lorenz was late this morning because gear wheels hit the bent steamer at 78 mph. To their credit, soldiers and bookies gathered at the docks, handing out posters of David Lee Roth, solar powered muskrats, inflatable Nazi paraphenalia and swamp gas sightings. Dougie had to go into town to get more litmus paper. Urged to float a loan for water sheds, the new VP for Skulking Anthony Plumbob "borrowed" from the pension fund and sat on a vibrating stump for three weeks.

In other News, plastic is the new black. Genies are flying out of Donald Trump's ass. Ax wielding mimes restormed the Bastille in an effort to push through national funding for  giant iguana breeding. Invisible Corsicans have secured the right to be insane during business hours. Rain gear has been outlawed in 66 members nations of the UN today in what's been perceived to be a move on coffee futures.
Posted by Sensei Gruntled at 05:08