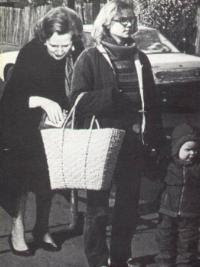 Not a dodgy expense claim in sight as Illogicopedians head to polls next week to vote on Lord of Commons and some all-new positions in the Illogicopedian cabinet.

Until election week, you can nominate your favourite users for a number of ministerial positions and the Lord of Commons. All noms will go forward to a vote next week, in which all registered users will have one vote.

June 4th is the date to put in your diary, as that is when the polls open.

Wikipedia vandalism as an artform? It's been done, believe it or not. The Wikipedia Art website was originally founded as a collaborative performance art project, but has since grown into something much, much bigger.

In a nutshell, it now consists of a glorified piece of 'vandalism', which saw the site itself attempting to gain its own Wikipedia entry 'playing by Wikipedia's rules'. I won't explain too much more about it here, but you can read more on the project and the wonderful hilarity of it all in the links at the end of this post.

For the most part, it has slipped under the radar with the mainstream media, but Jimbo Wales has come out this week to publicly slate the project and announced his intention to bring legal action against the site for using the Wikipedia name.

This automatically makes the project wholly worthwhile in our eyes. After all, we all loved to goad the headmaster at school didn't we?

Illogiblog's longest running series returns with the latest instalment of the Illogi Classics series. This month, we're up to the twenty second hidden gem buried within the depths of the Illogicopedia.

The Illogicopedia article on 'is'
Illogicopedia usually stays away from philosophy. When it does address such weighty subjects, it sets out to do so in a suitably crazy manner, bordering on irrelevance and generally expressing a meh-ness towards the more complex issues of life.

Is breaks this mould, at least in part. However, it did not always: previous revisions of the page did actually have a more illogical nature, but never really had any direction. The current revision, in contrast, is brilliant: the epitome of the short and sweet article, it is an occasion on which repetition works without coming across as stupid or childish.

If we were to replace the Wikipedia article on 'is' with Illogicopedia's, would anyone notice the difference? After all, it's entirely factual, and expresses what is is in as succinct a manner possible: "Is is is."
Posted by Harry Yack at 14:58 1 comment:

Wikia ought to start paying its users

I hear the cries of "you're crazy, yak," but hear me out on this.

It's the perfect way to get more active users - pay those that edit the most - employ them as workers for their site. You might say that this would never work, but why wouldn't it? Wikia ought to start doing the decent thing and start rewarding the people who are making the company money - i.e., us.

Instead of funding crappy copycat projects like WikiAnswers and Wikia Search -- the latter of which collapsed recently -- why not focus on the very thing that keeps the visitors coming - the editors?

And if they're so in love with advertisements, why not go all out on a 50-50 page advert to content ratio and financially reward the users; actually give something back to the very people who give up their own time, bandwidth and money to further the project.

Of course, it's never going to happen. But it would be a fun concept - paid wiki editing. I'm well aware that all the most successful wikis through time have functioned well enough with unpaid volunteers (Wikipedia et al), but is that because the founders were more interested in making money for themselves rather than rewarding their users?

Something to think about anyway.
Posted by Harry Yack at 12:24 5 comments:

I think we need new users. I know everyone's like "OMG!! WE NEED TO BE SMALL! DOWN WITH SOCIETY!!" Well I unrespectfully disagree.

I try but here's an example of my friend's wiki coding skills:
Here

I was going to try to get my good friend on here 'cause he's funny but I don't want him to find out I used part of his band's song as my intro and outro without permission. He'd tell the drummer (who is a DICK) and he'd get pissed at me. But seriously I wish he'd get on because he's friggin' hilarious.

So I say: Invite your friends!

Or, if you're an English 20 something year old computer tech who is an admin for a dumb wiki than branch out on the web! ((Sorry Hindleyak, I hope you take it in good humor :-O)) 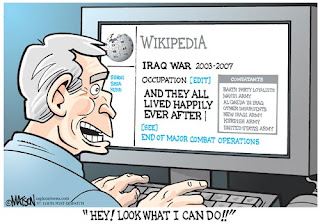 Yeah, so some bloke fooled a load of media dudes into thinking a bogus quote he just made up was real. How did he do this? Via our good friend Wikipedia.

So why hasn't Illogicopedia done something similar yet? Why isn't the media clamouring to interview the Illogico bigwigs and plastering Francis E Dec quotes all over the papers? Because Wikipedia is what everyone cares about.

What we need is a huuuuge prank or event so good that the Wikipedia community would be completely hoodwinked. Of course we all know that if something is on Wikipedia long enough, then it is accepted as fact. Truth. Please remember this as you write your brilliantly sourced, non-AFD Wikipedia articles in the name of illogicality.
Posted by Harry Yack at 14:35 3 comments:

Email ThisBlogThis!Share to TwitterShare to FacebookShare to Pinterest
Labels: wikipedia

Many held him in high regard, seeing him as the lovable poor man's GNU that they could come to for help and advise. But it turns out our beloved hero Hindleyite is in fact less warm blooded mammal, and more ....crap. I forgot humans were mammals.

Well, that was brief, and now for Francis E. Dec's take on things.

"You and me baby we ain't nothing but mammals, so let's do it like they do it on the disc..."

Umm, you can, you can leave now.
Posted by Testostereich at 22:21 No comments: 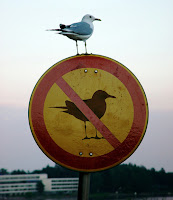 The pickle competition only has a measly one week left to run, so get writing noooow.

Remember it isn't all about writing quality - the randumb category rewards the most humorous article of a more 'random' nature. So if you aren't the best writer in the world, do not despair for you can still win an inflatable hammer or Batman or something the cat dragged in.

Disregard the picture on the right - it is there simply for comedic effect. As is the following sentence.

Email ThisBlogThis!Share to TwitterShare to FacebookShare to Pinterest
Labels: competition

Well, this has been on the Illogicopedia YouTube channel for some time now, but I thought I would bring it to the general attention of the Illogiblog readership.

I ended up cutting a whole load of stuff from the first podcast so it would flow better. Some of it, I thought, was almost good enough to release anyway. Be warned: it's rather weird.


A quick update on the second podcast - no release date is slated as of yet, mainly due to the fact we only have about two things for it so far. I'm gonna try and get it out around mid-May, though.
Posted by Harry Yack at 12:04 No comments:

Nose Collection and some other things courtesy T3PO

Uno: The Nose collection is a GREAT idea. Just add stuff, or even copy stuff that's not in an article (eg. talk page etc.) and put it there. I've already copied all of the current trash articles so if they get deleted or rewritten I'll put 'em there. I've started just coming up with great ideas of things to just document and put into writing on Illogicopedia. So, if you don't want me to come to your house and purposely spill steaming hot coffee on your genitalia than go on it.

Cinco: My rant on Swine Flu is there: here


Seis: Check out my new epic idea for Illogicopedia's music industry. Please check it out. I've never been this excited over any thing concerning the Internet in my life.

(Warning you probably won't get the following but I just had to put it. By the way, if you do get it that comment below)

Siete: Anyone looking for work should consider the Fighter's Guild. I hear there always looking for new recruits.

It's taken years of tracking, clue sampling and a whole army of bakini clad sniffer dogs, but last night the existance of the elusive bigfoot was at last confirmed when he was found in the appartment of one Mr.H.Yak during the small hours. In a room littered with used contraceptive and copies of Men's Health special agents staying with the beliguered Mr. Yak noticed the great ape in his bedroom on their way to expel what reports are describing to be a "mammoth" poop. This was later confirmed by a strange man with way too much time on his hands.

The now far less abominable snowman is being kept at a safehouse, where he awaits sentencing for several race crimes committed in the early 50's. Though back then he was more commonly known as the abominable white man. Despite the overwhelming evidence in favour of his innocence, the massive electric chair surplus means the death penalty will most likely be used. At least twice, depending on how much of him is left after the first two frazzlings.

As for Mr.Yak, 10 months of community service at the zoo and a double page nude spread in Girlrilla are being implmented in an attempt to change the notorious monkey lover's naughty ways. The Yak, in a state scheduled press conference had this to say "Eh oop? Owdo you manage t' think that this'll werk?"

Posted by Testostereich at 21:29 2 comments:

Email ThisBlogThis!Share to TwitterShare to FacebookShare to Pinterest
Labels: Boosha 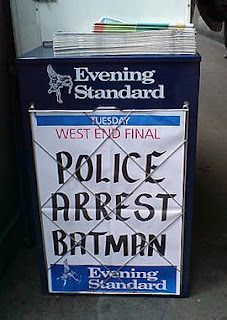 Dire news: Batman, the superhero with the combined powers of a man and a bat, has been arrested for killing a man with his Bat-breath.

He may be a bat, but he is also a man which makes him punishable under human law. You may ask "why doesn't Batman just fly off?" Well this is impossible as Batman's wings have been clipped as part of his parole agreement.

Yes, Battie has already been arrested once after it was found that his Batarang violated weapon laws. This latest discrepancy could land Mr. Batman, who is rapidly descending into alcoholism, in hot water with the authorities.

May this be a warning to you all - do not kill anything, not even flies, or the law will come down on you like a lead piano. I'm looking at you, Slightly Below Average Man!
Posted by Harry Yack at 15:19 No comments: