Hi, it's me again! I've come to talk about Thotmarket, the free web stock exchange. Or In their own words:

''ThotMarket.com is a social bookmarking website that provides links to interesting and useful content on the web. The links featured on ThotMarket have all been submitted by our users much like many other websites like Digg.com and Reddit.com. ThotMarket is a little different than those sites, however, in the way that these links are ranked. On this site, users buy and sell shares in these links very much like how investors trade shares of companies on the regular stock market. Links on the site are ranked by their market capitalization which is a measure of how money people have invested in it.''

Illogicopedia/ILLOGIA is on the site, and is doing... fairly well. Despite being up by 0.25 every day it has made some progress. We have a little box down the bottom of our blog menu, if you've ever wondered. It has 8 shareholders (including me) and I have recently bought a lot of shares! I own my own one as well, for My Yahoo!, my helpful start page. Anyways, Illogicopedia hasn't been hit by teh crebit cwunchh...

Join today and put Illogicopedia where it belongs in thotmarket - anywhere relativley near first place!
Posted by Ben. at 19:53 5 comments: 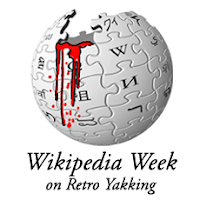 ... or, in other words, a blatant piece of whoring.

I would like to invite all members of Illogicopedia to Wikipedia Week at my Retro Yakking blog. As usual, it's going to be run in conjunction with Illogiblog, and if I get the time I will be posting tasters for relevant articles right here on the Illogiblog. Course, I would have just copy pasted them here, but apparently the powers that be (the dudes hosting my blog) don't like that very much.

So, bookmark Retro Yakking, or just stop by my userpage to read some tasters. Oh yeah, and don't worry - there'll be plenty of Illogicopedia whoring to bring our favourite Surreal Encyclopedia some visitors.

Also, I certainly hope you've all been keeping Illogic neat and tidy in my extended wikibreak, because I can't be bothered dusting around when I get back, OK? :D

Its your money, you paid for it!!

Hebrew goes here
Who knew text could be right-wing???

now for the other section:

Email ThisBlogThis!Share to TwitterShare to FacebookShare to Pinterest
Labels: Another gratuitously dumb label, awesomeness, bagel man, dumb, gasp, pointless tags, RANDOMNESS, Scarring the Minds of all who see it, too many bloody tags, Unecessary, wow 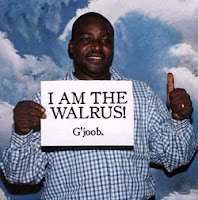 Gooooood day sir. I'm ringing to confirm that I currently have a code id ba dose and ah cahn't come to work. Well, OK, I'm on a wikibreak really so that's why I ain't around at the moment. I'll answer messages on my talkpage when I return but you can email me if you really need to contact me.

This week's thoughts:
Right. I will return triumphantly in the future, but for now, wear clean pants, and don't eat cheese before you go to bed. Yo.
Posted by Harry Yack at 22:21 No comments:

Mid-2007, Illogicopedia announced its partnership with Wikia, but not without plenty of persuading. In the infant stages of its life, Illogicopedia languished at Editthis and soon became ready to go independent. In fact, the move was days away from happening - the new wiki was set up and ready to go at a free web host. It was at the last minute, though, that Wikia changed their minds and (reluctantly) accepted the Illogicopedian community into their lion's den.

And lion's den it proved to be: the relationship between Illogic and Wikia was amicable. That is, until June 2008 when Wikia, without any regard for the community's opinion whatsoever, forced their Web 2.0 skin New Monaco upon the unsuspecting citizens of Wikialand. At the time of writing, Illogicopedia is currently on the Monobook skin by default but very soon it too shall be forced into the commercialised catastrophe that is New Monaco.

Of course we know Wikia is at the hands of evil advertising merchants who will stop at nothing to milk us for every penny, especially the case with the so called credit crunch of late '08. As such, we do not blame Wikia for this move, the staff are generally good-natured, if a little bit impersonal and robotic in their replies sometimes. In fact it is rumoured R2D2 works for Wikia....

Needless to say, the incident sparked outrage amongst the community with many users, including Asema, refusing to edit further until the matter was resolved. Compromise was sought by first asking Wikia if Illogicopedia could simply adopt the Uncyclopedia skin, to no avail. After the administrators repeatedly reiterated that New Monaco is not right for Illogicopedia, the discussion as to whether to go independent raised its head once more.

It was decided that Illogicopedia should move, but lack of funding and problems porting the wiki stalled it. Illogicopedia remained with Wikia until November, when alternative hosting was offered. Now, we are free.

Ladies and bumbasquats, I wish each and every single one of you a Happy New Year. Crack out the potato pie, because it's time to slob around and watch the footy for a couple of days. After that it's back to the grind, but for now bask in the glory with this list of ten silly vandal names of 2008, many courtesy of our friend The Avril Troll. Enjoy.Source - more reliable than Wikipedia and Conservapedia melded together in a superglue accident.
Posted by Harry Yack at 11:37 1 comment: