Welcome to the Illogicopedia weblog 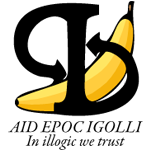 Illogicopedia is an insane repository of words put together in no particular order. It could be defined as a collection of randomness, a celebration of stupidity and insanity. It's a bit like the Uncyclopedia, only we are much more relaxed in the content we accept: nonsensical articles are kept and nurtured to be of a higher quality of babble.

The blog is, however, generally more serious in its nature: topics covered offer a more reasoned insight into the Illogicopedia and its associated projects. You might even say... it is logical.

Well, some of the time anyway.

The blog has been running its Illogicopedian Classics series, which has covered some of the best unfeatured content since August 2008. As a result of their appearance on the blog, some articles have consequently gone on to reach featured status on the wiki itself.

Aside from regular columns, there are the Thoughts of the Week, featured websites, Illogitoons and much, much more to satisfy your hunger for all things Illogicopedian. Check the 'features' sidebar for what else is going on this week.

A bit of Illogicopedian history

Since its inception in April 2007, the Illogiblog has been an accompaniment to the Illogicopedia and its projects, with site news and updates as well as snippets from some of the best content. It has covered momentous occasions such as the move to Wikia in April 2007 to the independence movement that dominated 2008.

The blog has undergone numerous redesigns and even launched a logo competition in May 2008. The current blog logo is an adapted version of a design by Robomilk, whose entry was selected from a grand total of three (!) entries.

An explosion in the number of posts occurred in September 2008, with a number of new editors joining the Illogiblog team. Since then, the blog has gone from strength to strength, spurring editors to create topics on all aspects of Illogicopedian culture ranging from political wranglings and heartfelt rants on the state of the wiki to irrelevant ramblings and general nonsense.
Posted by Harry Yack at 20:44

Email ThisBlogThis!Share to TwitterShare to FacebookShare to Pinterest
Labels: About, Hindleyite