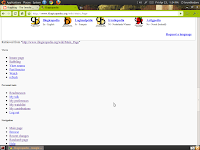 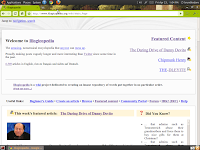 Whoa, now instead of disabling access to the website, Roberto has hacked the whole layout, too! The new release of the long awaited 'Roberto' skin includes:
With this in mind, we should all switch immediately! I mean, the benefits are unlimited!
Well actually, they're not, but we'll just say they are to please the Roberto to prevent any further treachery to the site. Captain RMS McSuper, away!
Posted by RMSam at 21:28 3 comments: 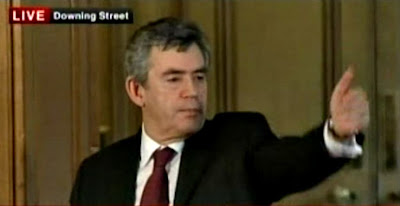 Easter holidays ruled, what came after drooled. Yes, Illogicopedia is experiencing one of those activity fluctuations, but since it seems to go through them on a regular basis I suppose nobody cares too much. Still, it's nice to see a return to the amicable chatting and gentle, non-controversial article writing we had before Membergate, as nobody likes to call it.

Not that there's anything wrong with controversy, something I like to stoke up every now and then, like just now actually: X Factor sucx hell yah! Controversy would make the world turn round if we didn't have a complex system of gigantic cryptids to do that for us already. (God is actually a giant Bigfoot.)

So anyway, I'd best succumb to peer pressure and talk about the General Election or something. I have included a picture of Gordon Brown in this post.

There, with that out of the way, back to the Illogicality. Anyone been to Uncyclopedia recently? Last I heard it was devouring itself backside first. Blasted vandals, I ought to squirt them with my water pistol ray gun! Wikipedia ain't much different, according to form. Something about dodgy pictures or something. Oh, where have we seen that before? Ah, this is surely the work of Roberto!

Anyhow, must dash. The cryptids draw near, and they appear none too friendly.
Posted by Harry Yack at 19:43 No comments:

Email ThisBlogThis!Share to TwitterShare to FacebookShare to Pinterest
Labels: ~~~~, Hindleyite

Hi. Its Ragglefraggleking. I'm back. Again. Yes, I know Ive been out for quite some time, but I still care to make a guest appearence here, and there, and everywhere, especially in your hair, but not that kind of hair you sick bear, i need to stop rhyming, its not fair, please shoot me, if you dare. Ok, ok. Teehee. Anywho, Im here to just randomly post. My internet activities the past few months include, Chewbacca Facts, random Google searches, and "other" things, if you catch my drift. ;) Well then, my mother still wont allow me to get XBOX LIVE. Which sucks. Cuz i want it. SO BADLY! haha, good times. Woooohhhoooo! Yes, i am in fact, drunk. I have urgent matters to tend to, so take care all ma' homies! (yes that was an insult to all you gays, just kidding) Word to ya mothers-RFK
Posted by Raggle Fraggle King at 22:14 3 comments:

The end of an era

On ThotMarket, the marketplace of Ideas, Illogicopedia (trading under the name ILLOGIA) has been de-listed, meaning we no longer exist as a 'thot' on the site. Due to lack of investment, despite my various pimping on both the blog and the actual site. It seems that we screwed up. This is a sad day for Illogia - the bank once freely flowing has now dried up in a instant. At our best we had 9 shareholders and a financial status which outshone ED (also De-listed).

I will be in the process of making a new Thot for our site, but it will need support from you guys (which means make a frckin' account) and a Roman Abramovich of teh virtual world to latch on.

By the way the sidebar on the right there displays the final status before the collapse of the thot. Awwww bless.

ThotMarket is a website which simulates the global stock market, using websites instead of listed companies. You do not need to know anything much about business and whatnot in real life, just basically know what money is. The site DOES NOT use real money, instead you gain virtual credits from investing wisely and eventually with a bit of luck end up on the fabled 'Thot 30'. The site does not cost you a penny.
Posted by Ben. at 22:07 3 comments:

Email ThisBlogThis!Share to TwitterShare to FacebookShare to Pinterest
Labels: As house prices go down Emu sales go up. Coincedence? I think not., News

Losing the Battle of the Bog 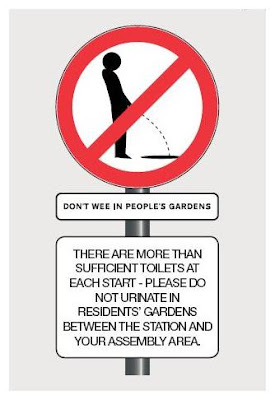 Ah, come on you lot, grow up. Surely you can do better than poorly MSPainted images of male genitalia. What are you, ten years old? Now, female bits might be a different matter...

Actually, no! I know the human wang is a beautiful thing that should be celebrated on a regular basis and all, but surely this sort of puerile nonsense belongs in the schoolyard and not the internet? There is no artistic merit that would elevate us slightly above the level of Uncyclopedia and (gasp!) Dramatica to be seen, so there is no point.

You know who you are. Further violation of the commandments shall result in punishment worse than death... a five minute ban plus an hour in an empty room with MrMetalFlower (sorry MMF, nothing personal).

Now stop it before I come round and beat you round the Dick King-Smith with long, hard, rusty baseball bat.

-- Message from your local friendly adminator (Arnold, brother of Roberto)
Posted by Harry Yack at 17:54 4 comments:

Dun dun duuuuun!
Posted by Harry Yack at 12:04 No comments:

Email ThisBlogThis!Share to TwitterShare to FacebookShare to Pinterest
Labels: The number of the Beast plus one 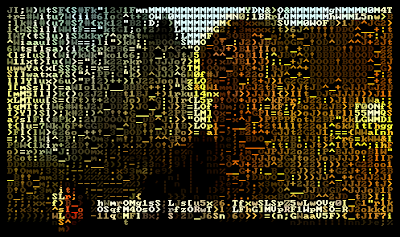 Illogiblog would like to formally apologise for yesterday's poor quality April Fools' stunt. I very much doubt if anyone at all was fooled, not least because the Illogicopedia main page fake error message wasn't too convincing. Well, it could have been, but a certain person couldn't be bothered hacking into the ?pedia mainframe ('twas behind seven proxies) to make the 'Illogicopedia scheduled maintenance' message appear without all the sidebar links 'n' stuff.

Nevertheless, at least it was better than nothing which, incidentally, is what Uncyclopedia did. That's right, they didn't bother to have an April Fools' front page prank this year! As usual, I blame the recession. No, wait...

If anyone was fooled by our little Roberto Roll, then congratulations, you've won absolutely nothing! Meanwhile, the real Roberto (heheh) continues to wreak havoc upon the Illogicopedia servers. As for his motives, who the heck knows? Whether he's just a washed out old homeless guy using the ?pedia server as shelter, we can only speculate.

Oh, and as an extra treat, we've included a 'TEXTp' version of the Roberto Roll in the head of this post, courtesy of YouTube and their top quality 1st April jape.
Posted by Harry Yack at 11:18 1 comment:

Because write. That's why.

I do hope everyone's broken springs aren't causing too many mechanical problems. I did break springs in a Very Important Clock and it did stop ticking. Oh yes it most certainly did!

Our servers are SRSLY skewered. Like, OKOK, hwere is my theory of who Roberto is. I think he is a Zombie Clown. By which I mean, a clown. With the white face paint and obligatory red rubber honky nose. But turned into zombie ala George Romero. (with maybe some John Romero in there as well) Yes.

With that said, I believe we did winned the April Wiseman's Competition Of The Vaugely Funny Related Wikis this year.

Beating the Wikipedes at their own game

Good morning everyone. I trust you are all enjoying your Spring Break/Easter hols so far -- that's if you aren't at work or something. If so, the festivities (?) will probably begin for you tomorrow with the traditional drunken Good Friday Blowout, which Illogicopedia will be taking part in! Kind of. Actually, not at all.

Anyhow, on Monday I mentioned Wikipedia will be introducing their new Vector skin later this week. Well, since that time, Carlb -- that's our friendly server owner (nothing to do with Roberto, you understand) -- has contacted me with some news that might be of interest to readers/editors of Illogicopedia. That's you, incidentally.

Carl has very kindly taken the time to install a special plugin on the Vector software that, well, is just plain awesome. So awesome, in fact, we'll be rolling it out before you can say 'bumper spaghetti harvest'. YAH! We're gonna beat the Wikipedes at their own game for a change, and how! Features included in the new Vector 2.0 skin:
... Plus a whole load more! Full details are outlined in this special video blog starring an old friend who's rapidly becoming something of a celebrity on Illogicopedia. Be sure to watch all the way to the end so you know what's going on before the new skin comes into effect.