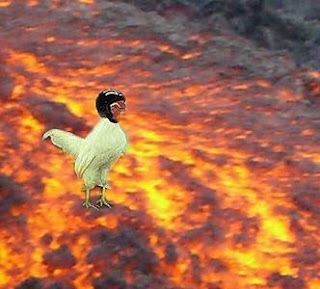 You read it here, I'm not gay! Shocking news via telegram. Man I really need to keep up with technology. Damn kerosene lamps, the always burn out.

Anyway, I'm trying to make a post, it is late and I have nothing good to tell you. What the hell am I supposed to do? /looks at Hindle's old rambles ah, I should randomly bumble British crap I don't understand. Alright, let's give it a shot: 'ot o' t' ot' ho! blargh blargh, tea and crumpets! pure genius! The critics are raving! "Raving mad" - Critic

Next off, time to list the accomplishment of my summer thus far:

1. Sitting around - Nothing better than getting fatter by not moving
2. Er, that's it

Damn, I hate summer! Also, about that image: I made it m'self, aren't you proud I have such good ideas as to make a chicken on lava doing wearing a space helmet doing an arab dance revolution? Man, Facebook sucks up my life.

This post is almost as layme as all of Testes' lazy attempts to keep the blog running. Gah.
Posted by RMSam at 05:20

Email ThisBlogThis!Share to TwitterShare to FacebookShare to Pinterest
Labels: cocks cocks cocks, shit i stole testes' label, warily poking blog maintenance in the eye with a stick, you won't be reading the tags