Hey Mr Taliban, hand over bin Laden or we will forcibly remove him 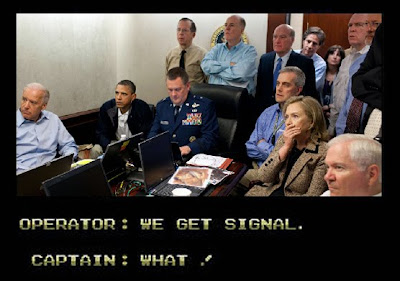 Illogiblog can exclusively reveal that Osama bin Laden was found after a tipoff from Illogicopedia. This page clearly states the man was hiding "in a council estate flat in El Pueblo de Nuestra Senora la Reina de los Angeles de Porciúncula, Burnley, Thailand, England. On top of a hill." Which, of course, turned out to be 100% accurate. Illogicopedia: working for the good of all men. And women. Except terrorists.

The house in which bin Laden has been staying for the last six years(?) was immediately put on the market and sold for over ten dollars. I know this because I bought the place and am currently reporting from a laptop I found lying around. It has a massive, N64 Goldeneye-style bullet hole in it but still works somehow, so who cares?