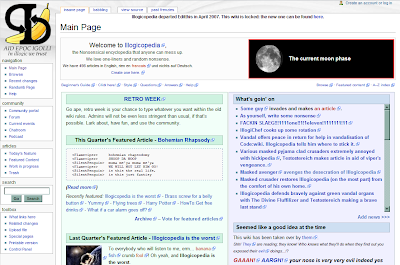 Here's a brief glance at how the old Editthis Illogicopedia looked back in December 2008, courtesy the Internet Archive. At this point, ?pedia had been at Wikia for more than a year but the Editthis wiki remained as an archive of past misdemeanours glories for all to view up until its quiet closure at some point in late 2009/early 2010.

The snapshot above, recorded for posterity at the Internet Archive, is the final incarnation of Editthis Illogic's main page featuring that oh-so-famously cringeworthy chatlog riffing on Queen's Bohemian Rhapsody. This was the final update at the Editthis wiki until 2008's Retro Week saw it re-open for seven days, during which time a number of articles were created and subsequently ported over to the new wiki the following week.
Posted by Harry Yack at 13:39