Is this thing on? 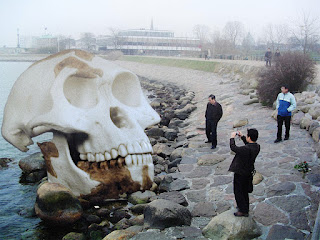 Back in the good old days, when people corresponded with things called letters, the famous Piltdown Man skull was exhibited at various river banks and sea shores. Thus, the spate of utter nothingness happening at Illogicopedia has resulted in the deaths of literally millions. In order to eradicate this seething threat from a Hell dimension, Wal*Mart is having a white sale, which I think is a bit rude to the rest of the population of America.

W. Kamau has a hilarious show on FX. I finally got around to setting up a cheap webcam for my laptop, and decided to check out Chatroulette.com. The idea, for those of us who live in caves and read a lot of Plato, is an interface where your image is shown to the person who is chatting with you, and you can see them. You can "spin" through random users, and they can "next" you if they don't want to talk with you. And vice versa. Also, the other way around

There were surprisingly few hits where I was treated to the sight of penises or breasts. Most resulted in young men with their shirts off and glazed eyes. I had maybe 5 genial if short conversations over the course of about 15 hours of use. More on this later, when I'm not feeling like a mastadon trampled me at the market while choosing a nice brisket for dinner.
Posted by Sensei Gruntled at 18:32

Email ThisBlogThis!Share to TwitterShare to FacebookShare to Pinterest
Labels: Gruntled, Nothing to do with Roberto, Random nonsense