Where Are They Now? #1 - The Chipmunk Chef 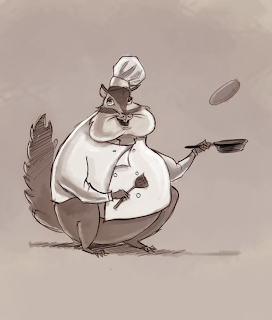 No figure was quite as prominent in early Illogicopedian history as the infamous chipmunk chef. Yet he remains elusive - nobody knows his name or current whereabouts, his favourite board game or brand of washing up liquid. He has only ever appeared online in two episodes of the Illogicast - once as a stand-in for Kerguelenese stuff you stick in yer mouth correspondent Gordon Ramsay, and once to drunkenly butcher a reading of the news.

Not unlike the Keyboard Hamster, the chipmunk's star shone brightly for all too short a time. Did he elope to warmer climes? Certainly, a great insistence on modifying his moniker from the French to the European Chipmunk Chef suggests a change of abode, or perhaps that his voice actor is terrible at sticking to any one particular accent but his own.

Could he be dead? Diners at his restaurant in Nancy would often meet gristly ends shortly after consuming his 2 Euro 'Meat Thy Maker' raw steak special - did he accidentally swallow one of his own poisonous creations? Or maybe he wandered too far into the forest one day? Certainly, woodland residents do not take too kindly to boisterous, gluttonous ex-Illogicopedians, so they may have speared him with a particularly sharp stick before feeding him to the crocogators.