The Hamster On The Keyboard: An Obituary 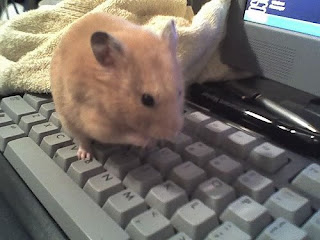 *Not actual Keyboard Hamster.
Terribly sad news: the Hamster On The Keyboard has died.

The HOTK shot to fame in Serpeniver 2007 with his masterwork A hamster on a keyboard, which garnered critical acclaim from the higher echelons of the Illogicopedia. At his most prolific he was nominated for Writer of the Month and was the subject of the tribute article A hamster on a keyboard (phenomenon) in late 2007.

Almost a year after completing his most famous piece, the HOTK was honoured with an Illogi Classic entry recognising his literary prowess and proclaiming him a genius amongst his kind.

He never received any official awards for his efforts, and being a most humble creature would never accept them, but the Hamster will live long in our memories thanks to the legacy he has left on Illogicopedia.

Rest In Peace the Keyboard Hamster.
Posted by Harry Yack at 23:01