Bcbkye is not the type of person you want to be meeting in everyday life, so it's somewhat disturbing that he turned up earlier this year on opinion site Sodahead. The results were... unspeakable, to say the least.

Perhaps just as scary is the fact a single photograph of this overtly malevolent childrens entertainer currently retails at a whopping $349. Yup, every kid's favourite bloke in make-up has been whoring himself out to PlayClown magazine, and has this week participated in a sordid and rather terrifying photoshoot for said publication. If you're feeling brave enough to see the whole gallery of Bcbkye's evil escapades, click here. Warning: It's very scary and certainly not for the faint of heart.

We would reproduce a couple of Bcbkye's pics here on the Illogiblog, but cannot for obvious reasons. Earlier this month, it was reported that five kids entered cardiac arrest upon hearing Bcbkye utter the words 'I know where you pee'. We simply cannot take the chance that a simple glance at his fizzog will not lead to long term illness and/or agonising death. That, and it would cost Illogicopedia far more than the site is worth. 350 smackers? Ya gotta be joking. 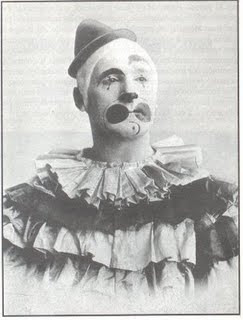 There you go. Oh, and in the unlikely event of the above photo not depicting Bcbkye, one can safely assume it has been replaced with a free use image from Wikipedia because the server owners chickened out. But I can't see that happening. Nope.
Posted by Harry Yack at 19:15