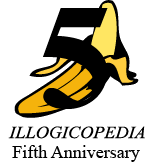 As Illogicopedia enters its sixth year of existence, we're ushering in a new era of nonsense and general madness with a bunch of cool stuff even the most hardened of Uncle Pete users would find mildly awesome.

To kick off the new year, we're seeing the return of that Illogicopedian institution, Big Brrother. The Hoose is now open, and even though you probably aren't allowed in there we can still discuss goings-on in the Illogicopedia common room. Make sure not to give away any happenings from the outside world, though, or we'll be forced to insert blunt objects cake about your person. Huh, I guess that particular bit of censorship won't work too well, but never mind.

It's not often we launch official votes for stuff, but ?pedia's fifth anniversary is as good a time as any. All Illogicopedians are free to vote in the People's Choice Awards, and you can do so up until 1 April, so by all means take a look. There are prizes for Best Article, Best User, Most Awesome Thing to Happen on Illogicopedia plus a bunch of other categories we haven't yet thought up. Oooh, it's all so very exciting!

Celebrations are already well underway, for now in place at the Illogicopedia is a super-special commemorative wiki logo (above right) courtesy The Happy Spaceman and a highly apt featured article. There's more to come, we're sure of it, so keep an eye on the Illogiblog for any as-yet unannounced TQ (that's top quality, incidentally) stuff.

Remember, Illogicopedia will be five years old in less than a week, so don't forget to buy cake and presents to the surprise party we're all planning. We'd appreciate if you kept it a secret from Illogico, however, otherwise it wouldn't be a surprise, would it?
Posted by Harry Yack at 12:05