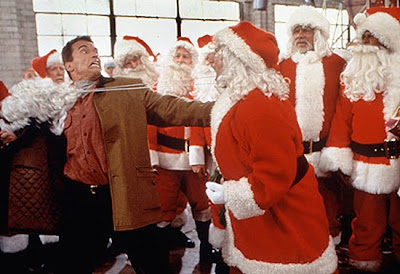 As is customary for this time of year, Illogiblog would like to extend a hearty "Happy Christmas" to its readers, all three of them (wait, that joke sounds painfully familiar). Unlike in years past, however, we aren't doing anything special, and for that you have Roberto merchant bankers to thank. Yep, for once it isn't all Big Bob's fault.

Never mind, though, because Christmas isn't about money, it's about kicking shopping arcade Santas in the 'nads and getting away with it. And watching that rubbish Arnold Schwarzenegger thing where he beats up a factory of Father Christmases.

Anyhow, I hope you all get what you want, though I know that this rarely ever happens. Turns out you can't buy a Bcbkye commemorative mantelpiece plate for love nor money at this time of year. *Sigh*. Looks like I'll have to settle for Does This Bus Go to Orpington? The Board Game again. Do not come to our house for Christmas tea or you'll regret it for the rest of your life.
Posted by Harry Yack at 14:07

Email ThisBlogThis!Share to TwitterShare to FacebookShare to Pinterest
Labels: Get to da choppa, Merry Christmas dudes