As another action-packed year draws to a close, Illogiblog concludes its two part rundown of 2010 through the eyes of an Illogicopedian. 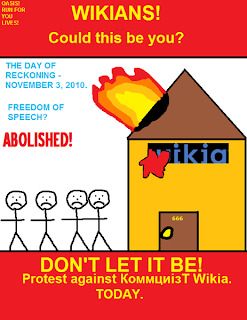 July saw a new challenger to Roberto's dominance in the form of Guru Meditation. He didn't make too many inroads, and eventually teamed up with Big Bob to form the League of Illogicopedian Evildoers, led by the Hickipedia Vandal. To this day, the battle between good and evil rages as ?pedians fight to repel the various attacks of the LIE and anon IPs, no doubt sockpuppets of Bob and the Guru. Plans to issue administrators with paintball guns may be the way forward, though reports suggest the swines stole lab goggles. Maybe they’re smarter than we think.

Over at Wikia, things were starting to bubble under once more. Talk of a new skin was rife, and Uncyclopedia continued to feel the pinch as Jumbo Whales and Co. went into damage limitation mode. We wouldn't see Oasis, the eventual successor to New Monaco, until October, but concessions had to be made at Uncyclopedia as early as May, when the Almighty Overlords inflicted forced MySpace-esque social network and Web 2.0 nonsense upon poor Uncle Pete.

Illogicopedia saw a real revival during autumn, with a wave of new and returning users revitalising Recent Changes in the continued absence of the old guard. Those in question cite 'real life' as the reason, though as we all know this is no excuse as there is no such thing as real life. It's all been a lie, I tell you! To combat the overarching apathy, two new admins, the first for over a year, were appointed in December. It remains to be seen how successful this will be, though unless Illogic is completely downed we'll chalk up pretty much anything as a victory for team ?pedia.

As with Illogicopedia, Illogiblog experienced seasonal fluctuations in activity. The aforementioned revival, which began around October, coincided with a burst in posts focusing on such familiar subjects as Oasisgate and spam – lots of it. Oh, and not to forget your friend and mine, the omniscient Roberto, even if his grip began to weaken in the winter months as he instead opted to stay in bed and watch Jeremy Kyle. Maybe he couldn’t afford the bus fare to Canada to wreck the servers again. 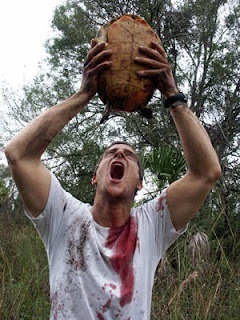 There were also a surprising number of articles (actually two, but that's a lot by ?blog standards) on nature boy Bear Grylls, who reportedly died in November. ?pedia Shop started selling steaks branded 'Bear Grills' in his honour, though to date we’ve only managed to sell a grand total of three – the rest of the stock remains in my freezer along with Grylls' severed head. Don’t tell anyone, though. About the steaks, that is.

And so we finish the year on a high, with more people than ever passing through the gates of Illogiland. To be honest, most of these got lost looking for Uncyclopedia or unwittingly wandered in whilst searching for the Holy Grail. Despite this, we have high hopes for 2011. Who knows? Maybe this will be the year Illogicopedia achieves total world domination.

I'll be happy with just the assassination of Roberto, however.
Posted by Harry Yack at 17:33

Email ThisBlogThis!Share to TwitterShare to FacebookShare to Pinterest
Labels: 2010 A Retrospective, Hindleyite