The first Illogi Classic of 2011 is upon us. Quick, call the fire brigade and have them remove it before it crushes us all to a fine paste! 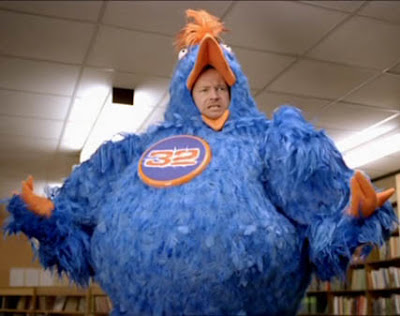 Bring it on down
As this article approaches its fourth anniversary, we thought it necessary to finally give Bring it on down the recognition it deserves. Actually no, it doesn't deserve any, but we're gonna do a post about it anyway.

Perhaps more notable is the above picture, included in the article, which just so happens to be one of the first uploaded to the Illogicopedia. Not much is known of the origin of the BIOD bird, though many speculate it hatched in a remote part of Scotland not yet touched by human civilisation: Glasgow.

The article itself continues on the general theme of aggressiveness initiated by the title, which challenges one to bring oneself and a cardboard box down the stairs or something. I dunno. A later addition was the infantile threat of page deletion, the image for which became just as synonymous with BIOD as the Irn Bru bird. Oh yeah, and I still have a picture of that on my userpage for some reason.

These days, nobody gives a crap about Bring it on down but that's alright because it sucks anyway.
Posted by Harry Yack at 12:15