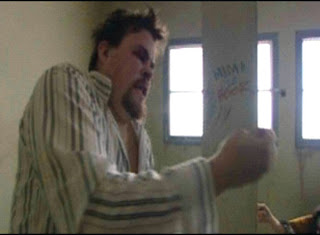 Voting is stupid. The very idea of supporting an argument by any method involving incrementalism is fundamentally flawed and as stupid as post whoring on forums, at least on Illogicopedia. It's like pointless friend collecting on Facebook, or uploading horrible videos reviews to YouTube in an attempt to attract subscribers. Man, is it fun though. Trolling for the win.

And fundamentally, the very purpose of ?pedia is to be illogical, but voting on stuff is a logical way to settle arguments.

Man, I gotta stop listening to David Cameron. I'm going insane, crazier even than when I wrote 'God Save the Cheese'. At this rate, pretty sooon I'll end up like the bloke in the picture there.

Anyway, here's some daft thoughts of the week courtesy the little leprechaun that lives under my bed and brings me lager.