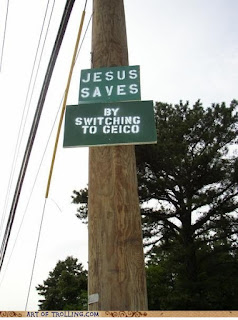 Top theologians from around the globe are meeting today, coincidentally Easter Sunday, to discuss the recently discovered, obscure passage found in a bible dating from 10 bce. Known as the, it has been tentatively translated from the original Pali

This happens every time I start a new religion. No sooner do I begin to construct a foundation for yet another new, shiny spiritual awakening vehicle, than dissenting voices make themselves known. Irregardless of the fact that the voices emanate from within the confines of my own brain pan.

Thus far, I've only got the idea that the word "Monotreme" is in the name, and that there is some sort of amazing event called the Platypocalypse. Apparently, Jesus really was a raptor, back in the day, and that dinosaurs were the original Jews. Noah was a proto-lemur, who saved mammals from the meteorite cataclysm about 65 million years ago by inventing the inflatable raft.

Cain and Abel were the primal blessed vessels, designed by God on spec to house souls. Cain represented the monotremes, or egg-laying mammals, and Abel was chief among the marsupials and placentals. After God made quick work of the dinosaurs, leaving only chickens, He got to work picking out who was good and who was bad. He decided to leave it to chance, the Holy Equivalent of a coin toss, and it fell to the egg-layers to be the Jews, forever to walk the Earth chosen yet tortured, except for the ones that make it in Hollywood or banking or diamonds.

So, the Platypocalypse... That would be something like, "...and lo, didst the disciples of the shell rise up across the lands, and didst they multiply furiously and inexplicably and seethe across all the oceans of the Earth, and ravage the beaches, and the fields, and the cities, and the cattle, and the goats, and the other stuff. People got pretty upset about all this."
Posted by Sensei Gruntled at 02:49

Email ThisBlogThis!Share to TwitterShare to FacebookShare to Pinterest
Labels: Gruntled, Lawdy, Left wing bias, look out a monster is right behind you, Rant, Treich