Well, give me an enema and call me Mr. Squeaky Bum, if it isn't time for another foray into Illogicopedia's archives. I hope you appreciate this particular entry because, in preparation, I spent three years locked in a musty basement with just 3,000 ancient maps for both sustenance and company. I have no idea why. 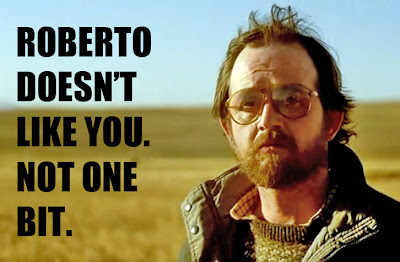 You
You has (or should that be you have? Wish I'd listened in English at school now) a special place in Illogicopedian lore due to it being one of the first pages created at the Editthis ?pedia. Somewhat surprisingly, most, if not all content from the original revision back in February 2007 remains, and forms the bulk of the article's opening today.

Later additions embellished the article's already-established illogicality, with a rather humorous dictionary 'definition' courtesy the Suicidal Delinquents Wordbase. It's a book I own, and that's because I actually wrote it. It's five A4 pages long and typed in Comic Sans 16pt with triple line spacing and a nice picture of a smiling frog, which I drew in red ballpoint pen, on the front cover. If anyone wants to borrow it, drop me a line. No, seriously, I really need someone to talk to. *Gibber*

There is also a wonderful See Also section complete with throwaway joke, which is always good to see. Arguably the best version (pictured below, just in case you can't be bothered moving your mouse) of the article, however, comes courtesy of 68.109.157.206, and consists of simply "you suck teh ballz". Insightful stuff, I'm sure you'll agree.

Actually, the article is quite often vandalised, but was never touched by the likes of Avril Troll, the Hickipedia bloke or Testostereich in his more destructive days. Oh yeah, I went there.

You might not also be interested to know there's a whole category dedicated to you. Well, not you personally, unless you happen to be Testicles (wow, he got two mentions in two paragraphs, what's the world coming to?) or Seppy, who have special dispensation to circumvent already tenuous vanity policies. They are above the law, like Ronnie Biggs in a helicopter.

I know, that reference was crap, and an indication that it's about time I drew this post to a close. I'm now off to the Crystal Dome to see if Richard O'Brien still lives there.
Posted by Harry Yack at 13:44