Well, I hope you're happy now, Roberto, you great bully. You've made me visit a site other than Illogicopedia for scientific, academic research. I have a mind to report you to the headmaster for your misdemeanours, and this time it won't just be a slap on the wrist. That's right, Bob. It's the irons for ye!

So as you might have been able to tell from this post's title, Illogicopedia has gone down and I wanted to contribute to the site in some manner. It's times like this I'm glad the Illogiblog is hosted on a different server so we can still rant on about nothing in particular to our hearts' content. Yay!

That's not to say we aren't grateful for the fantastic host we currently have. It's certainly better than many other, second-rate wikifarms out there on the Internet, not mentioning any names (*cough* Editthis *splutter*), and is ten times less restrictive. Double yay!

Anyway, here's some vaguely amusing content. Thanks to a working time machine, the Fresh Prince of Bel-Air was able to go back in time and open up a shop selling postcards in Wigan. Evidence for this can be found in the following newspaper clipping from some time in the past: 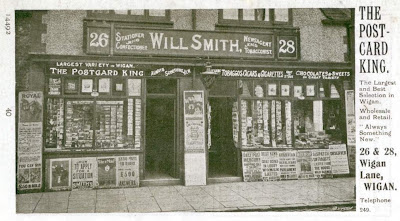 Right, that's enough of that. Phew, for a minute there, this post was in danger of becoming mildly
entertaining.

I'm off to varnish the cache server to see if that has any effect on ?pedia's functionality. I'll let you know if anything happens, but in the meantime, try not to spam too many forums with posts about fnurdles, ultimate shotguns and such like, because Illogicopedia will be back!*

* Not applicable if Illogicopedia returns. In that particular case, ignore the previous comment.
Posted by Harry Yack at 17:32