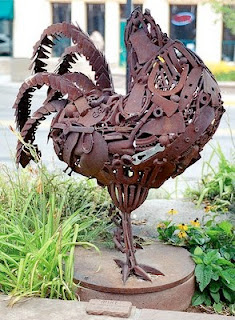 The reason it was an article which wrote itself is that I had pasted a huge waste of seemingly random text into the article, and was about to save it, when the computer apparently saved it of it's own will.  Of course, my wife and I prostrated ourselves before the laptop, much to the surprise of our dog, Frunobulax.  Next, I added the part about the article writing itself to commemorate this act of Divine Providence, or something.
Afterward, I noticed a warning on the top of the page about the size of the file I had just saved, and that some browsers may have trouble with it, and I surmised that somehow this was connected with the providential saving of the file.  Bubble burst, shoulders drooped, I shuffled off into the kitchen to get some ice cream.
This chicken (pictured) has zero heads. That is not the same as saying, "The chicken head is nothing". I win.
Posted by Sensei Gruntled at 03:57