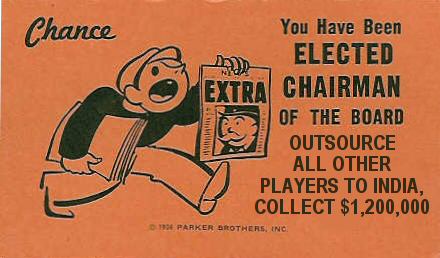 Yesterday, my whiny pobrecita of a niece was begging me to play the world's most famous board game with her..... that one with the guy with the funny top hat on the box...... the one that breaks many Supreme Court decisions..... that one? Ah, forget it. I'll look at the top of my post. Monopoly, eh?

I broke out the board only to find that my niece was too busy talking to her boyfriend of the millisecond to play the game she begged me to play with her. Soon after that, he threatened to break my nose when I told her to get off the phone. She (eventually) did, and we started to play. I was none other than the money sack, to symbolize greedy crapitalism. She was the dog, because it was oh-so-cute!
We played for hours on end, accumulating money that you would be tasered for if you tried to spend anywhere else, and streets in Bruce Springsteen's homestate. Bruce would be so proud as I bought the boardwalk, where he probably made out with that prom queen or whatever on.
Anyway, when playing this aging classic, I realized a central truth: Technology is a beautiful new innovation. Because being the Banker took a lot out of me, as it was way too much math. I responded by buying the computer version of Monopoly.
Robots are going to take over the world as we're too lazy to do this crap ourselves. We will rely on these things to take showers, eat, brush our teeth, and just about everything else. If the power goes out during the storm, we're screwed. Good night, and bad luck.
Posted by Colonel Sanders at 10:39