Inclusionism v. deletionism: an essay by the Telegraph 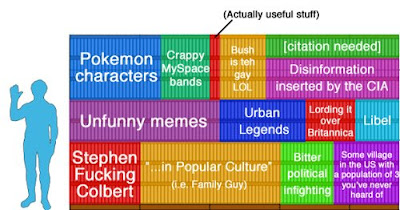 What Wikipedia would look like if on paper, broken down by qwghlm at Flickr.
Shane Richmond of the Telegraph has decided to address an age-old wiki issue: the battle between inclusionism and deletionism.

The article claims to be about a recently passed music journalist, and how deletionists don't want his page to be kept at Wikipedia. By normal standards this instance is not in the least newsworthy, yet for some reason every so often the mainstream media decide to report this stuff. Stuff that happens every day on Wikipedia.

Whatever, it's as good a reason as any to blast the deletionists. Blast them I say! :)

Deletionists are trapped with an outdated metaphor. They want to make a “quality encyclopaedia”. The notion of quality, like usefulness, is relative. Relevance is a much better measure.

The concept of an encyclopaedia comes from the print age. Limited space meant limited entries, so the notion of ‘notability’ helps when choosing what goes in. Limitations on how often a new edition could be printed meant that accuracy was all important. You don’t want your encyclopaedia to be filled with mistakes.

True, but paper-based encyclopedias took a select group of people years to write. Wikipedia has millions of editors so it's not always possible to police absolutely everything, not least verifiability.

In summary, you journalists should forget Wikipedia and concentrate on Illogicopedia.
Posted by Harry Yack at 18:45