My Quite Serious Opinion

This wiki has a problem and I am really fed up with it.

I think all this Holier-Than-Thou, anti-corporate "We don't have the backing of large organizations" talk has a major flaw in it's reasoning.

I would call this, "The Roberto Fallacy."

The Roberto Fallacy is the idea that anything is better than what everybody else is using, even if it doesn't actually work. This is why Ubuntu has been erroneously called "Linux for Normal People." 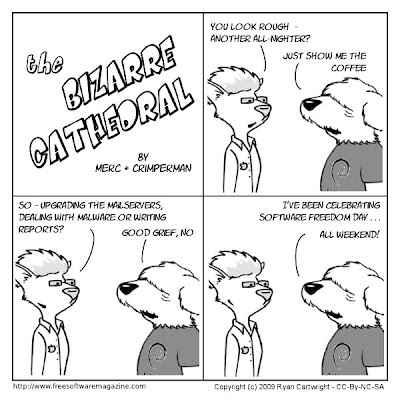 In case you don't get it: he's been spending all weekend digging through forum posts and getting trolled on IRC channels trying to get his Linux box to do simple tasks that it should do automatically by default without having to deal with any of that crap.

Anyway, the point is that clearly, independent hosting is not working for us. It has too much independence and not enough hosting. The site seems to be down more than it's up!!

Carib is a great guy and it's wonderful that he's been willing to donate the use of the servers and whatnot and I'm not being critical of him. This is not his fault at all. But something needs to be done to get us to a point where our site works regardless whether it's independent or looks exactly the way we want it to look or whatever other crap. Functionality: being UP and RUNNING must trump every other consideration.

Something's got to be done here. We've got to get the site running reliably, all the time. That might mean going back to Wikia or some other less than perfect outcome. But anything beats having no site.

BTW, I have an old, seldom-updated blog where I've written down some pointless rants in favor of a more balanced view of the free software and free culture movement.
Posted by Nerd42 at 23:52