Mr T Says: Ignore it and it will go away 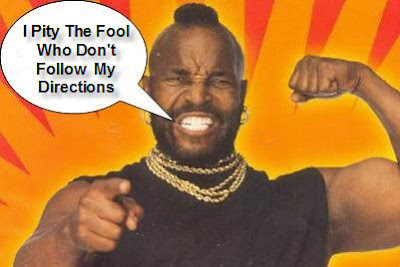 Now listen up, fools. It may be hard to turn a blind eye something as blatant as a man parading the streets with a seven-foot afro, or a kid at the cat rescue centre in a dog suit, but pay them no mind. The attention seeker, upon being ignored, will naturally move on to somewhere new, where they may be annoying a whole new audience, but at least they're not pestering you. Besides, it's funny to see other fools get pissed off. That's why we watch those Simon Cowell shows or Ultimate Fighting Championship. But not me, I pity those suckas beating each other up for sport. When you hit a man, it should be out of hate for him.

Heed the words of B.A. Baracus and you won't go far wrong, children.
Posted by Harry Yack at 13:26