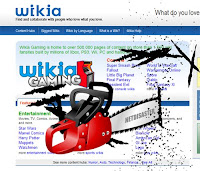 Well, it seems nobody likes Wikia right now. A good web host should place the community above everything and do everything in their power to keep them happy. I ain't saying that Wikia don't do this, but a lot of people seem to disagree with me - cases in point:
Yes, I know Wikia are but a pawn in the capitalists' plan but, come on. Why does everything have to come down to money? Can't we just enjoy ourselves once in a while?

Cheers to Netdisaster.com for the pic.
Posted by Harry Yack at 14:11