The Deadly Ghost of Spellchecking 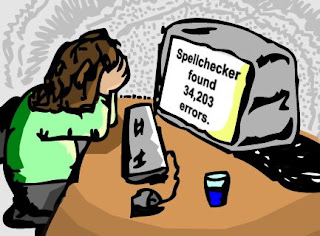 He's at your school. He's at your place of work. Heck, he's even probably in your home right now. No, it isn't Santa Claus drunk again, or even some coked-up door-to-door salesman... it's far more serious than that. It's the Deadly Ghost of Spellchecking.

And this ain't no regular, plate-chucking poltergeist we're talking about here. The worst part about it is that, unlike Bcbkye, the children's entertainer that escaped from the mutant circus, it's always there - an omnipresent (non?)entity that will harm your self esteem more than a 12-year-old YouTube troll on a sugar rush.

This bothersome phantom will pressure you into producing perfectly formed sentence structure and attempt to force upon you its sentiments. "Think of how much better the world would be if all this "Ow RU doin?" and "B bak l8r" nonsense were eradicated... no more illiteracy in society, more esteemed authors and article writers that don't rely on fatuous gimmicks to pull in readers." (Cough, don't for one moment think there's an ounce of hypocrisy in the previous statement...)

Agh, no! I have already been affected by its presence, for I find myself constantly correcting the spelling errors in this very post. Errors in speelling and gramour that would get me thrown out of Cambridge with but a pencil and a used condom to my name (well, you don't want to know what they really get up to there, do you? Thought not! Anyway, I digress). I have to remind myself that this post is hardly likely to be read by the Head of Languages at Oxbridge, and much more likely to entertain some kid with a chewing gum addiction.

But that's exactly the point, who cares about spelling when the readers themselves give not a snot about my inaccurate, sorry excuse for a dead pigeon that I call English? I could be illiterate, or worse, a tax collector using money as construction paper for all they care. As long as the general point is conveyed, job done and give me my five pounds. That is, if it isn't made into an origami swan first...

So this ghost should not be a burden upon my (granted, sesame seed sized) intellect, there are plenty of other pretentious dung beetles that will do that for me. That, and the fact I called the Ghostbusters and they rid my house of all such supernatural beings!

Oh yeah, and 'of' in the title should be capitalised. Or should it?!

This post has subsequently been serialised in, erm, one Illogicopedia article. Cool beans eh?
Posted by Harry Yack at 11:30