The Roberto Family: Bringing down the Internet one wiki at a time 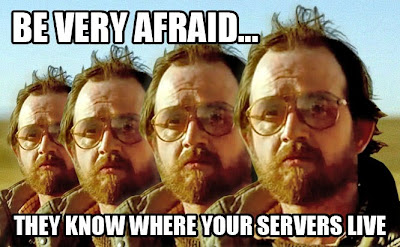 Following Illogicopedia's latest server crash, we have some rather scary news to bring you. Roberto and his family of deranged clones (pictured above are Roberto, Roberta, Bert and Robbie) have not only succeeded in crashing Uncyclopedia, which has been experiencing periods of downtime, but also pioneering humour wiki Encyclopedia Dramatica.

Roberto's hatred for wikis is well-known: aside from destroying the Illogicopedia servers on a regular basis, he brought Wikipedia to its knees in 2010, and sources indicate he will not stop until the Internet is rid of all such websites. Now, armed with a selection of humorously-named clones he created from his own saliva, his evil plans are mere days from becoming a reality.

Popular meme-bashing website Encyclopedia Dramatica was relaunched under the watered down guise of Oh Internet, a new venture somewhat resembling Know Your Meme, on 14 April. ED has gone mainstream, much to the chagrin of its users and web trolls alike.

Illogiblog can exclusively reveal that Roberto was instrumental in this change, demanding 20,000 Pot Noodles and 1,000 boxes of Krispy Kreme donuts otherwise he would wipe the site from the face of the earth. In a panic, the site's owners caved in and went ahead with the unintended revamp. They did pay $40,000 to purchase said foodstuffs, but someone broke into ED HQ and pinched the lot under mysterious circumstances. By the way, if anyone wants a Pot Noodle I'm selling them for 50 cents each. Check out my Paypal page for more information.

Illogicopedia is down but not out. We shall fight Roberto and his mini-army of nefarious clones and ensure Illogico (and Uncyclo) shall not meet the same fate. The future of the Internet is in our hands.