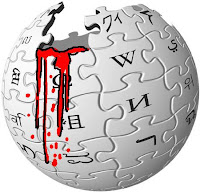 You might be asking what the heck BJAODN is. Well, it's short for Bad Jokes and Other Deleted Nonsense, and if you've ever visited Wikipedia you've no doubt stumbled across it. It's pronounced 'buh-jow-dun' (probably) and stands for 'the funny bits' of the Free Encyclopedia. A crucial part of Wikipedia's history, it logs those 'less than serious' contributions that have since been deleted or reverted in one pocket sized page.

In recent times, the BJAODN has been all but banished from the Wikipedia kingdom as they attempt to discourage 'vandals' and 'miscreants' from adding stuff like "A easy way to test for color blindness is to stick ur finger up ur nose and hold ur leg up while singing the national anthem." Some archive pages still remain, but the landscape has been devastated and with the demise of the Buhjowdon, part of Wikipedia's soul descends to Hell via a very public toilet.

"I like to find out that I died, and that I'm currently in a ballet in China, and all the other very accurate and important things that the Wikipedia site brings us all." -- Stephen Fry on Wikipedia

I know some Wikipedians are becoming increasingly cheesed off by the site's image. Whenever Wikipedia is mentioned on a television programme it is usually followed by some mildly humorous statement such as "I visited Wikipedia and it said the Eiffel Tower was in Basingstoke". I personally love it when I come across these kinds of edits (not that I would condone vandalism) but the powers that be are employed(?!) to root out any traces of humour Wiki-wide (hence the unofficial 'Fun Police').

But do not despair, nonsense lovers! BJAODN is not dead, it has just moved house. Of course we all know about Illogicopedia, Uncyclopedia and even Wikihowl, but it seems the coverage of Wikipedia BJAODN is more comprehensive than ever. My personal favourite right now is Deletionpedia, a huge archive of some of the best stuff deleted from the Wikipedia database. Wikidumper, meanwhile, organises deleted content in blog form. A BJAODN archive website can also be found here, and provides hours of mirth for those of you with an open mind and a mischievous side.

Let's round this off with a good old fashioned BJAODN fest, shall we? All text reproduced verbatim, cos it's funnier that way.
May the first and last ones go down as classics in BJAODNian lore.
Posted by Harry Yack at 15:29