Another essay on Wikia

I was lying when I said I gave you my final word on Wikia. The actual likelihood is that the closure saga might run on for longer than was originally expected, especially since the Wikia representatives have been rather quiet on 'their' Illogicopedia site recently. 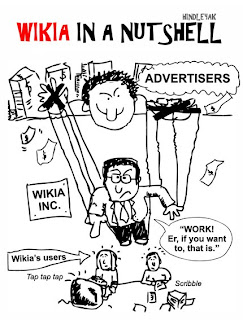 Still, I've been immersing myself in past Wikia discussions in order to form a more informed opinion on the situation with Wikia as a whole. They do have their numerous vociferous critics but I am tempted to feel sorry for Wikia and the fact they are under constant pressure to pander to advertisers' wishes. After all, they are the middle men that have little real say in the big decisions - their financial situation dictates what goes on at the site, in essence. A pity, because the idea of a collective pool of knowledge that anyone can access and cite freely is an idea that even Henri de Saint-Simon would be proud of, and for all Wikipedia's well-publicised problems with accuracy of entries, for a free resource it's better than a kick in the teeth.

But the road to Hell is paved with good intentions, especially where big business is concerned. It is all too easy to take the view that each and every one of Wikia's actions are governed by their advertisers, but at some point along the line they must concede that their soul is slowly ebbing away with the inevitable community departures. It could be argued that [weasel words] it's time for Wikia to admit defeat - the list of disgruntled 'customers' (if you could call them that) grows by the day is only going to get larger as long as the advertisers have their way. And would the world be a worse-off place without the Family Guy Wikia? Or the Cheese Wikia? I'd guess for most people the answer would be 'no', after all, where these sites are concerned Wikia is just acting as a glorified web host, surely?

I disagree. It's my personal opinion that the wiki is an excellent invention, a wonderful tool for communities to collect their knowledge together in one place quickly and easily. And so what if there are adverts? Not everybody can afford their own private, ad-free webhosts. So, I say the following.

If you aren't too concerned about site design and having to give up ad space at the expense of information; if you aren't concerned about dealing with corporate representatives and their stock responses to queries, then go ahead, Wikia will be an excellent choice. Be warned, though, for invariably big business is a large, capitalist farmer willing to milk you for all you're worth and whose decision making essentially seeks to benefit themself.

I still maintain that, in Illogicopedia's case, Wikia could have been more trusting and respectful of the community. The backlash is likely to be a drawn-out one, and though things are likely to be resolved quicker than the Spanking Art (this link SFW, the wiki itself may not be) situation, the whole New Monaco/Advertising dispute can't have escaped the attention of the wider press. You must have gathered by now that this thing is much bigger than the Illogicopedia.

I bid you good day, and a happy Thanksgiving season if you're in North America.
Posted by Harry Yack at 12:01