Aw no, not another one of those statistics posts

Indeed, time for a report on the Feedjit statistics for the past couple of weeks. It seems the Illogiblog's more popular than ever, with visitors from countries as far afield as the Phillipines, Puerto Rico, Panama, Italy and Hungary hitting illogicopedia.blogspot.com. Check out the visitor map for North America: 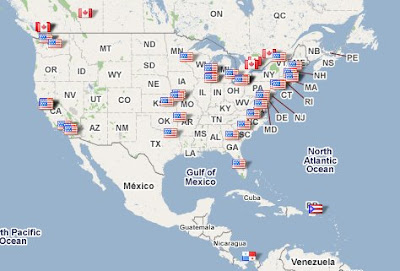 Illogiblog is now in the top four million sites on the web according to Alexa traffic stats. It is also getting around twenty hits a day now (sometimes more), with people finding the site from Google Search, Illogicopedia and Uncyclopedia. Well, that isn't a large variety of links, but it's a start...

For Illogiblog to increase its rank further, it would have to have more visitors referred from various other sites in the top ten such as Facebook, MySpace etc. In this regard, illogicopedia.org fares slightly better, ranking at just over 2.1 million - certainly a bit of a jump from the last update, when it ranked in at around six million. Whoa!
Posted by Harry Yack at 18:55