Warning: A serious post follows! Also, reader discretion is advised when searching for web info on this topic. 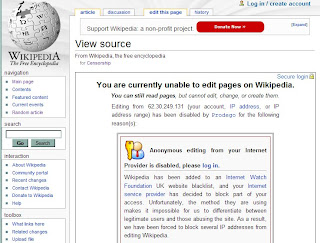 If you live in the UK, there's a chance your IP is currently blocked from editing on Wikipedia because the Internet Watch Foundation have blacklisted the site. Why? Well, the issue stems from an image used in an article about Virgin Killer, an album by 70s Rock Band The Scorpions, which supposedly depicts child pornography on the album cover.

As with all child sexual abuse reports received by our Hotline analysts, the image was assessed according to the UK Sentencing Guidelines Council (page 109). The content was considered to be a potentially illegal indecent image of a child under the age of 18, but hosted outside the UK. -- IWF Statement

As a result, the page in question cannot be viewed on UK browsers. Wikimedia have protested that other sites such as (Warning: may not be SFW >>) Amazon continued to host the picture (though the cover now seems to have been replaced with an alternative, non-offensive version) and it can easily be accessed via Google Images without the application of Safesearch. Wikimedia go on to claim that they "have no reason to believe the article, or the image contained in the article, has been held to be illegal in any jurisdiction anywhere in the world".

Wikimedia stands by its 'Wikipedia is not censored' stance, and I for one agree with them. What will the nanny state think of next? We won't be able to view the article about Middlesex? Well, that was a bit of an over the top reaction, but if Wikipedia give in to the censors now, who knows what they'll have to concede in the future.

Of what use is that repellent picture? -- "A caring mother", from Wikipedia Talk:Virgin Killer

To any concerned parents: I suggest that you take on board the fact that Wikipedia is not censored before letting your child use the site. Yeah, the pic was a bit repulsive but it was an actual album cover and is therefore encyclopedic, if you see what I mean. The fact that it caused controversy when it was first released makes it all the more notable and important that the image be used in the article. Wikipedia could take the picture down but it would border on breaking their own code of ethics, so argue all you like but there'd have to be some major policy changes for Wikipedia to give in to this one.

My guess is that this will blow over pretty quickly and we will have forgotten all about it by the New Year. Fact is, IWF received a complaint and they have to be seen to be acting upon it: meantime, Wikipedia get a bit of free publicity. So, despite the fact our friends at The Free Encyclopedia lose some editors for a while, they at least get a bit of promotion, gratis. :)