Thoughts of the week (April 10th) - Pink elephants in the room

After a three-month absence, Thoughts of the Week is back, at least for now. The reason for this is the fact I have some time to fritter away right now, and though there isn't an awful lot happening in the world of Illogicopedia at the moment, the hope is that very soon there will be. 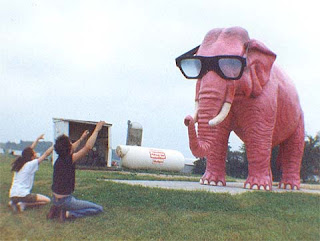 It probably won't have escaped your attention that the podcast is back once again. Well, to tell you the truth, I have had the first edition pretty much mixed for the last few days and barring a tweak or two, it is finished. I am not releasing it, however, until I think there are a few people around to listen to it.

To this end, I hope to get VFF rolling once again and push through a few more features in the next week. With a bit of luck this will have a domino effect, as when people see new content they are inspired to write more. At least, that's the theory.

I am glad to see that Illogicopedia is still rolling nicely, and for as long as there are people around to push the buttons, the wheels will keep on turning even in periods of relative inactivity.

A final word on the 'array' bug, that annoyingly persistent pink elephant in the room. Well, I personally haven't a clue what that's all about, but I recommend Internet Explorer users switch to Firefox or Safari in the meantime, as the glitch doesn't seem to have affected those browsers as much.

Stick with Illogicopedia, as the grand launch of a new Pickle is imminent.
Posted by Harry Yack at 21:09