One man's vanity is another man's puppy-wuppy 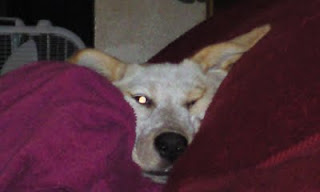 So, I've made another blog with loose ties to this here one, being as that it's all illogical too. Taking full advantage of the Illogicopedia's "you can even write about your dog" informal policy, my dog Frunobulax has begun her own venture into the blogosphere called Frunobublog. Ostensibly based on her quest for access to higher spiritual planes, the thrust of her nefarious writings are directed towards doing her best to be "Daddy's baby girl". She loves to be called that.

As I observe, Frunobulax is licking Auntie Carol's coffee cup. Apparently Nutrasweet is as good as sugar to her. In this picture she is performing an obscure Bon Po ritual to invoke a mountain demon named Fred. We're going to entice him with licorice, capture him and place him in a demon containment device and pay a visit to the Catholic church across the street. I so owe the Catholic church.

And Roberto strikes again! Just last night I started to write Monster Bunny. This morning, having been a kind and dutiful husband and doggie daddy, I "took care of business" around the house, performing morning rituals solo, in order to let Sister Zim_ulatrix sleep a bit late. She hasn't been feeling well lately, so I've been cutting her some slack. I've even given her a reprieve from the electric cage.

Monster Bunny is an article about a toy that belonged to Evelyn The Modified Dog. Or is it?
Posted by Sensei Gruntled at 04:34

Email ThisBlogThis!Share to TwitterShare to FacebookShare to Pinterest
Labels: Another article about my dog, Blatant whoreage, Gruntled, Roberto, websites