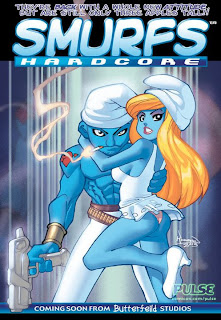 Smurfs: Hardcore starring Bruce Willis and Katy Perry will be coming out to select theatres in a couple of months, and I can hardly contain myself. The role of Gargamel is done entirely with CGI and a cardboard tube about 4 feet long.

Julian Assange was not in the news again this week. Even Uncle Pete hasn't seen hide nor hair of him. One may wonder, what is a Frenchman doing in Australia in the first place. It's all very suspicious, bordering on the unAmerican. More evidence of a continuing Cold War?

The British and the Poles are still irritating this week, insisting that pastries can be used as a carrot in the carrot and stick approach, when everybody knows pastries are not vegetables. A civilized discourse quickly degenerated into a slap and tickle when Cambodian diplomats applied for a fondue license.

Does it bother anybody else that Canadians rioted over the Stanley Cup, the Americas most coveted hockey trophy? What hope is there for humanity when the streets of Toronto are running with hockey loser blood?

Elsewhere, Illogicopedia is still in a state of petulant frenzy. A straw pole points to increased need for sedation and medication of contributors to the wiki, myself included. Since the majority of the "audience" for Illogicopedia consists primarily of the collective voices in the heads of we, the writers, most rest easy knowing that there will be no power outages or governments collapsing due to our absence from the interwebs.
Posted by Sensei Gruntled at 16:32

Email ThisBlogThis!Share to TwitterShare to FacebookShare to Pinterest
Labels: crap that has something to do with ?pedia, Gruntled, stuff that happened in 2011, thoughts