End of the World Rant 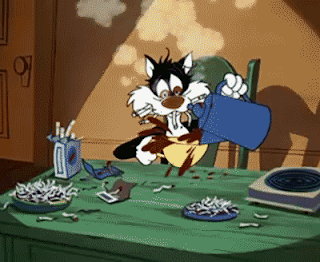 The Apocalypse has been on the minds of many Christians and others since it was first documented by St. John the Divine on the island of Patmos. To put things into perspective, though, this was the same time that St. Vitus Dance competitions became a craze, sweeping the Roman and Persian empires. The Aliens may be here any minute now. Since the ratification of the Strategic Doggie Fart Initiative by the United States Congress in 1967, a mounting fear has gripped the citizens of the world, in some cases, by the balls. Who knew, back in 1938 when Rudolf Cantankerheit designed the first weaponized doggie fart delivery system, that an arms race of canine gases would come to dominate the last half of the 20th Century?

Fortunately, there is a place you can go and find valuable information about the whens, wheres and hows of a potential world-ending event. It's run by a secretive blogger which calls itself User:127.0.0.1. Even the FBI can't locate this individual, credited with sowing panic into the masses by the dozen. Zombies, penguins, polar bears, Reeses Peanut Butter Cups, Jesus, undulating tentacles of a horror from beyond time and space and many other possible causes to the worlds end are carefully researched and documented on the Apocalypse wiki. Eeble. Sonk.

Posted by Sensei Gruntled at 05:06

Email ThisBlogThis!Share to TwitterShare to FacebookShare to Pinterest
Labels: Another gratuitously dumb label, Cack, do not under any circumstances read this, Fnurdle, Gruntled, look out a monster is right behind you, Rant, test ostrich