Is Illogiblog really that bad? 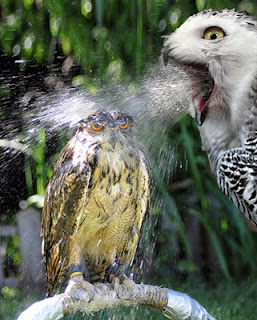 It has come to our attention here at Illogiblog that reading much of the content here is a lot like being sprayed by owl vomit. Well, not vomit precisely, but whatever is in the picture (right), it's certainly more than just water. So, if that's what my writing is doing to you, poor dear readers, I say, "What's wrong with you, subjecting yourself to such drivel? Are you some kind of lab experiment with an inconceivable tolerance for crap?!"

In back country Finland, watching owls projectile vomit is considered a sport. Villages compete for distance records, number of horks per event, number of humans caused to throw up because of the spectacle and other obscure and untranslatable awards having to do with lots of snow and caribou.

Well, I don't know about you, but I learned something today.
Posted by Sensei Gruntled at 04:51

Email ThisBlogThis!Share to TwitterShare to FacebookShare to Pinterest
Labels: crap that has something to do with ?pedia, Gruntled, Pointlessness, Rant, Unwarranted, weird stuff