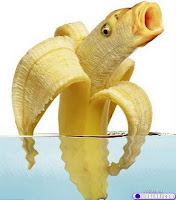 Following in the footsteps of super-sensational Black Metal band Metalocalypse, researchers at IllogicoLabs have developed an effective media delivery system for fishes.

Says Dr. Zinbat Calliflorensia of IllogiLabs LLC, "By far the greatest challenge was to adapt bananas with seaworthy gills."

We are adopting a modified Microsofteseque Blitzkrieg methodology with which to quickly and massively saturate the markets in all major oceans and seas.  Although holding an initial monopoly on marine fish as an audience, we realize that alone will not guarantee far-reaching success and permanent world domination potential.  That is why we have acquired a fleet of decommissioned Soviet submarines.  If necessary,  we can interfere with merchant shipping long enough to focus our fleet of laser shark satellites on cowboys.
Posted by Sensei Gruntled at 14:37

Email ThisBlogThis!Share to TwitterShare to FacebookShare to Pinterest
Labels: Cack, crap that has something to do with ?pedia, current affairs, evil, Gruntled, Illogi Times, Nothing to do with Roberto, Stuff I made up just now, Treich